Every year we hear that Cyber Weekend was the biggest weekend in US online shopping history… Well, this year is no different. As predicted, Cyber Weekend sales eclipsed last year’s results, and set the stage for record-breaking overall holiday shopping revenues.

Forbes reported that about 58 million people shopped online only, while 51 million shopped exclusively in stores. The another 65 million consumers shopped both online and in store, for a total of 174 million shoppers over Cyber Weekend.

While data for the top national retailers is readily available and fascinating, where does the aesthetics industry sit and how has ecommerce and the holiday shopping phenomenon impacted dermatologists, cosmetic surgeons and other aesthetics providers? 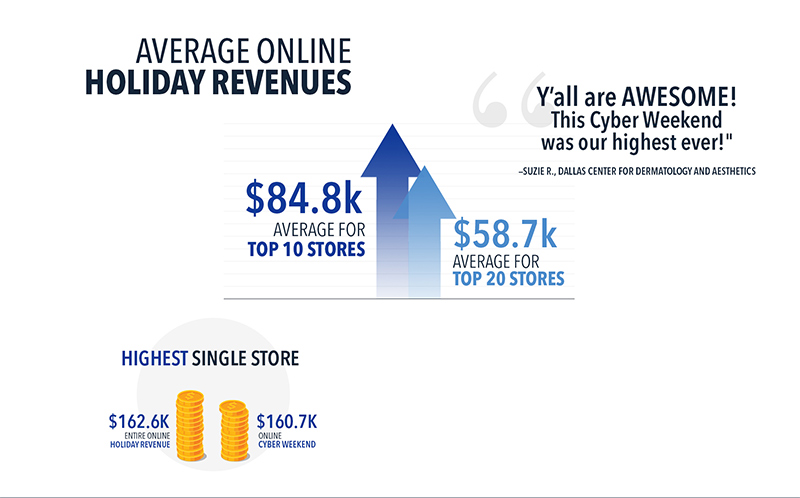 The Aesthetics Shopping Report from DermPRO

With 7 years as the top ecommerce provider for aesthetics practices—hosting stores for hundreds of dermatology and plastic surgery practices and medical spas in 43 states—DermPRO is uniquely positioned with insights into what’s happening in online sales in the aesthetics industry. DermPRO’s Holiday Shopping Report and Infographic offers a rare view into real results from real aesthetics practices.

Many DermPRO-hosted stores running Cyber Weekend and holiday promotions bring in 30-40 percent of their annual online revenue during the last 5 weeks of the year, depending on several factors such as when they run their big Open House Events and how aggressively they promote during Cyber Weekend.

This year, the top 20 revenue-producing stores over the holiday shopping period averaged 35 percent of their total annual online revenues. While Cosmetic Services are the highest segment for revenues overall on DermPRO stores, during the holiday shopping period, E-Gift Cards brought in almost as much as Cosmetic Services, and indeed e-gift cards are always some of the most popular holiday season sellers.

Top Days and Times of Day

While Cyber Monday was the clear single-day winner—accounting for 40 percent of the Cyber Weekend revenues—not surprisingly, Black Friday was the second highest day of the period. All of December was strong, though, thanks to an increased number of practices that ran 12 Days of Christmas promotions, keeping patients coming back throughout the month.

Mirroring the results from Adobe’s report, Cyber Monday got a huge boost from late night shoppers. While Adobe reported that nearly a third of Cyber Monday’s total revenue came between 10 p.m. and 2 a.m., DermPRO found similar results with 9 p.m. being the most popular shopping hour by a landslide. Given that most medical offices were open that day, it may surprise you that so many purchases came in at 9 p.m. But the data shows that the online orders accelerated as the Cyber Weekend specials came to a close. 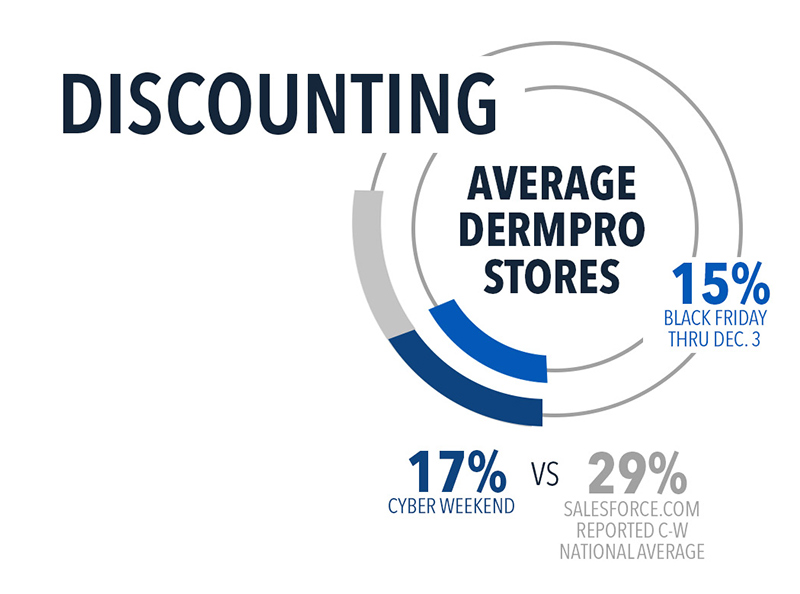 If you think that successful selling over Black Friday or Cyber Monday has to include deep discounting, think again. According to Salesforce.com’s holiday shopping reports, average discounting reached 31 percent on Cyber Monday, with some segments discounting as much as 45 percent.

However, on DermPRO stores, the average Cyber Weekend discount was just 17 percent, and just 15 percent during the whole period from Black Friday to December 23rd. DermPRO’s clients are primarily respected physicians who have strong relationships with their patients, and are generally not high discounters.

What Did They Buy?

Even though discounting was modest, higher discounts did correlate to larger AOVs (average order values). AOVs were highest during Cyber Weekend when the discounting was also highest, averaging $357.18 for all DermPRO stores. Many individual stores carried $500+ Average Order Values, thanks to popular e-gift card promotions and higher-priced treatments that were specially priced for the weekend. AOVs decreased slightly when you look at the entire Cyber Week ($342.27) or the entire Holiday Shopping period ($310.08).

This year, patients purchased gifts for their loved ones and themselves, spending big on e-gift cards, BOTOX® treatments, Laser Hair Removal, and memberships & special treatment packages. The top selling procedure by revenue was BOTOX®. Taken together with other neurotoxin treatments, Neurotoxins captured 11 percent of the total revenues for the weekend. The 2nd place aesthetic service was Laser Hair Removal, accounting for around 5 percent of the weekend’s revenues. 25 percent of all Cyber Weekend revenues came from E-Gift Cards.

While product sales were spread across many different products and brands, there were some stand-out products, including TNS Essential Serum® and SkinCeuticals® CE Ferulic. The top brand by units of products sold was EltaMD. 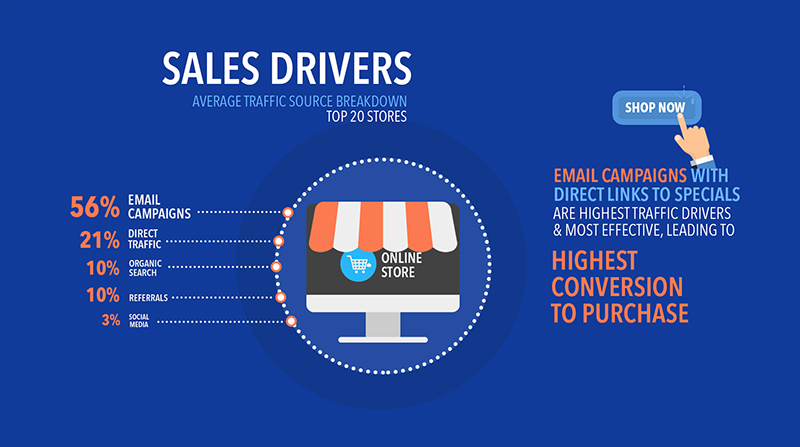 What Drove Traffic to the Stores?

According to Practical Ecommerce, paid search ranked highest for driving revenue, representing a 24.4-percent share of sales, followed by direct traffic at 21.2 percent, and organic search at 18.8 percent. Bringing up the rear were email driving 16.8 percent (up 9 percent over 2018) and social media with only a 2.6-percent share.

Curious about how patients ended up on the aesthetics online stores? Since DermPRO stores generally see less traffic from paid search and more direct traffic from the practice’s main website and from emails, the sales drivers were quite different from the drivers for the large commercial sites.

Learn more about Ecommerce-Enabled Services from DermPRO by submitting the simple form in the sidebar of this page.