According to Gartner, “The 2020 holiday season… saw a shakeup of traditional shopping behavior.” Adobe Analytics analyzed 1 trillion US retail sites and found that US online sales during November and December increased 32.2% year-over-year, totaling a record $188.2 billion. SAP Customer Experience provided insights into what they described as “a massive surge in online sales,” pointing to the pandemic, earlier deals in November, increased mobile purchasing, and higher Average Order Values as contributing factors.

The Aesthetics Shopping Report from DermPRO

While the national retail data is meaningful, our focus is on the impact of ecommerce and the holiday shopping phenomenon on dermatologists, cosmetic surgeons, and other aesthetics providers. With 8 years as the top ecommerce provider for aesthetics practices—hosting stores for hundreds of dermatology and plastic surgery practices and medical spas in 43 states—DermPRO is uniquely positioned with insights into what’s happening in online sales in the aesthetics industry. Our second annual Holiday Shopping Report and Infographic offers a rare view into real results from real aesthetics practices.

Analyzing data from all of the online stores hosted by DermPRO, this year we looked at data for three primary periods: Cyber Weekend—Black Friday (November 27th) through Cyber Monday (November 30th), Cyber Week (November 27th thru December 4th), and the entire holiday shopping period covering all of November and December. As our second year publishing this report, we have the added insight of comparing the 2020 results to those of 2019.

The top story this year in aesthetics ecommerce? Higher ecommerce revenues, higher average order values, and higher purchase conversions than ever before. The average holiday season revenues of the top 30 stores was $143.4k, which is 440% higher than the top 30 stores averaged in 2019.

Higher Revenues Across a Broad Spectrum of Aesthetics Practices

While some may be inclined to believe that flourishing online aesthetics revenues may be attributed to a few successful practices, we expanded our data this year to look at a greater number of stores. When we saw that average holiday revenues for the top 50 stores in 2020 were almost twice what the top 20 stores averaged in 2019, we knew the growth was broadly applicable, and not isolated to a few smart and thriving businesses.

In fact, during each period that we analyzed—Cyber Weekend, Cyber Week, and the entire Holiday Season—a different practice topped the numbers for each. The top revenue-producing practices were highly diverse, ranging from newly-opened stores to stores we’ve been hosting for many years, from medical spas to dermatologists to cosmetic surgeons, and geographically spread across the country.

Aesthetics stores followed many of the same trends that were identified in the national landscape. In step with SAP‘s data referenced above, the Average Order Values (AOVs) during Cyber Weekend and Cyber Week eclipsed those of 2019, with all DermPRO stores averaging $522 for Cyber Weekend, and $413 for Cyber Week. That’s 47% higher than the AOVs of 2019. Further, the top 30 stores in 2020 had significantly higher AOVs, coming in at $741 for Cyber Weekend and $585 for Cyber Week. These high AOVs were driven by high sales of cosmetic procedures including CoolSculpting®, neurotoxins, and dermal fillers, and buoyed by high-value gift card purchases. 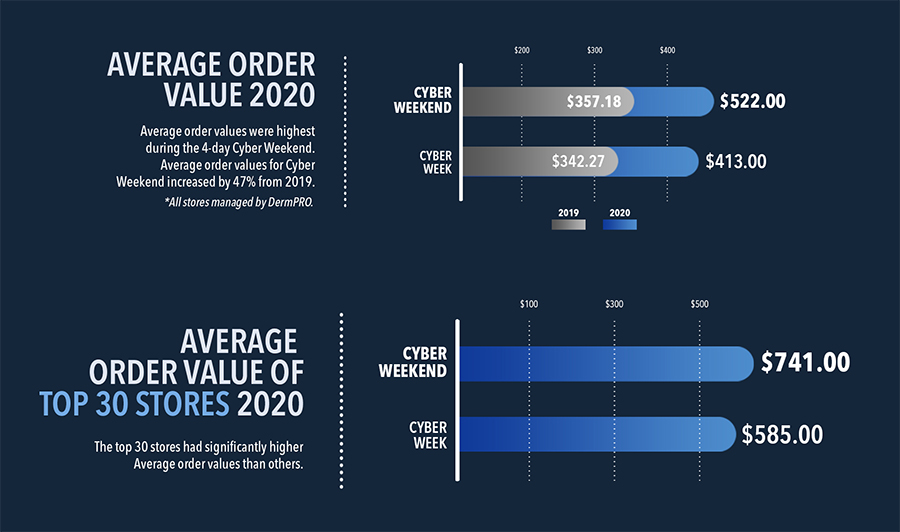 Some of the other overall trends mirrored by aesthetics stores include strong November revenues, and higher conversion rates. In 2020, November revenues were twice the December revenues. This is partly attributed to Cyber Monday which contributed 43% of all Cyber Weekend revenues—the highest single-revenue day of the season—falling in November, whereas in 2019 it fell in December.

But there were also higher revenues in the first three weeks of November, partly propelled by virtual events. As events in 2020 shifted from in-office events to virtual events, event revenues have ballooned when paired with convenient online purchasing offered pre-event, during the event, and post-event for a period of time. These virtual events helped push November revenues beyond typical levels.

If you think that successful selling over Black Friday or Cyber Monday has to include steep discounting, think again. Even though the average discount rate for U.S. merchants on Cyber Monday was 29 percent, according to Salesforce Inc.’s holiday shopping reports, the average Cyber Weekend discount for the top DermPRO stores was just 17 percent, and just 15 percent during the whole holiday shopping period.

Further, those stores that were the most successful across the entire 2-month holiday shopping period discounted even less, with 13 percent and 10 percent average discounts for Cyber Weekend and the Holiday Shopping period respectively. DermPRO’s typical client is a medical office with strong relationships with a loyal patient base, and generally offer modest discounts.